More little updates. Life is calming down some. Whew! I needed a couple weeks where nobody in the house had to go out of town!

This weekend I did my first run starting to enter “real” lmarathon training runs. I did 15.5 hilly miles. I was just dead afterwards. You know those runs where you wonder how you ever did 26? It was one of those. I took Jasp swimming for a little bit later in the day and then met a friend at yoga, which I would not normally do after a long run, but that was really the only day I could go. So perhaps I overdid it a bit, but I definitely feel like I’ve entered marathon training, aka always tired and hungry. 😃

The only new news is that Jasper started taekwondo. We debated doing it. He does swimming already and we’ve been rotating through the Y’s team sports to help work on interacting with peers, teamwork, etc. We’ve had a couple epic tantrums, but we’ve still tried to push doing things with a team. He really wanted to do taekwondo, and we did a trial class. Of course he loved it, and of course it’s very expensive. There’s equipment now and fees for belt graduations and mandatory memberships into the American Taekwondo Association. But, there’s also a requirement to meet behavior goals at home and at practice to move up in belts. And a behavior chart. It’s only been two weeks in taekwondo, but this was the first weekend in a couple months without a massive tantrum (or multiple tantrums) as is the case most weekends, which usually means by Sunday I’m totally fried and start the week on the brink of my own breakdown. The take home discipline chart appears to be highly motivating. If it continues to work, it’s money well spent. I’m also pretty impressed with the the program so far and how much the kids get to work on skills and how much the instructor motivates them to do what they are told. So yes, for purely selfish reasons I am digging taekwondo. It’s keeping me sane, and keeping the little Tasmanian devil calm.

And finally, some smoothie news. Now that I have a real blender, I’ve been branching out. Why did it take me so long to discover protein powder? I guess I always thought it was a waste of money and wouldn’t add much, but it makes smoothies taste like milkshakes. I have the Trader Joe’s brand. I know everyone loves Vega, but the price tag. OMG!!!! You need to take out a second mortgage to buy that stuff. I’ve never had it and you don’t miss what you never had. I’m sticking with TJs.

Ok, time to sleep. Yes, it’s only 900 but I ran extra early so I could take a little doggie to the vet for some minor surgery. Time to curl up with the little doggie and get ready for some hills in the morning. 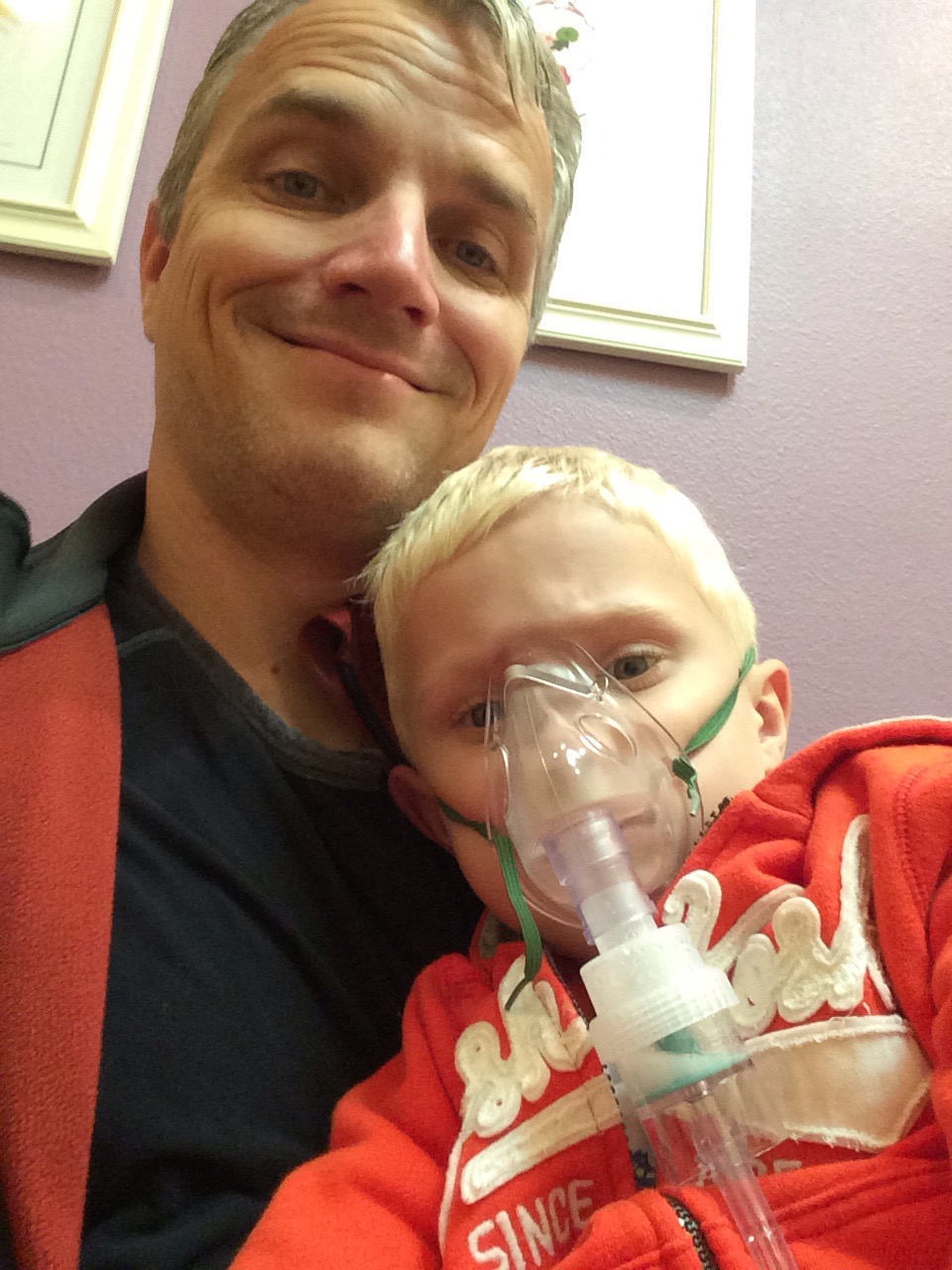 One of the many highlights of the last week…

The last week was a full one. The short version: I flew to Chicago and back, I got a mild stomach bug there, it put a damper on things, Jasper had another reactive airway episode, and got a real diagnosis of it, so that bought him a nebulizer, I missed more work, and I I tried desperately to catch up on work, I did a run with the marathon pace groups during our first real winter weather weekend, lots of standing around in the cold on said run meant for lots of muscle soreness, I celebrated a birthday, I requested a stress free day without me reaching my breaking point, it sorta happened. I got a Ninja ( take that vitamix!), I made my first pumpkin pie smoothie, My very kind and generous family over- gifted me with Lululemon giftcards, And I have some shopping to do. I went to a real yoga class, and despite a birthday massage, my entire body hurts from the real yoga class. I had a great birthday dinner, with salmon, an IPA and a peanut butter dessert.

And now I’ve got some soda crush to play with a little black fur ball at my feet. And then bed calls!

It’s been a very stressful last couple of months. Mainly because at least someone in this his household has been constantly traveling. Add to it some good stress….running a marathon, getting a new dog….yes, these things are wonderful but not really relaxing. Then some bad stress, sick kid, constant appointments, trying to work….you know the old “I’m doing a lot of things but not doing any of them very well” deal, and that’s where I’ve been. This weekend the stress continues with a last minute work trip for me. In Chicago where the high is going to be in the low 30s. Ouch. The puffy jacket will come out. Actually there is no downtime on this trip, so I really won’t even need to see the outdoors, but I plan to run. Last time I had this same conference I was able to run the lake path. Hotel treadmill is a back up….it’s not like I’m not used to it. 🙂

DaVinci is settling in really well. We had a few marking territory incidents I was not happy about, but once he seemed less nervous that stopped. His running is not going well though, but it’s ok. He seems utterly uninterested in going on a run, but will chase a ball for hours. So that may be his gig. He sleeps on the bed which is something Cake never has done. It’s nice to have a doggie at your feet all night. I’ve caught him and Cake playing a few times too, which is the biggest relief that their temperaments do indeed mesh, and there is no aggression. He’s really good with Jasper too, where as being an older dog, Cake always just tolerated him, but was never that interested in him. It’s nice he has a dog buddy now.

I’m staring to plan for Austin marathon! I got invited back for the pace team, which is a huge honor I really enjoy. We are about 13-14 week out, so I’m back to some mid range runs. I will always run Austin as long I’m capable. It’s just so cool to have a home town marathon. This will be my 14th Austin this year. I missed two years….one was early one before I realized I’d have a streak and I took off the year I got married and graduated nursing school the same winter as the marathon…and then the year I had Jasper I was on bed rest for post partum hypertension, but I probably couldn’t have managed even walking it if I had been allowed. I was a mess. I give myself a pass for that year and the year I missed for trivial things like graduating and marriage ( I kid), I still did the half, so I’m calling it a streak!

Well….I’ve got a super early wake up tomorrow and I’ve spent two days with a feverish child glued to me starting at 4am…so yes, I am tired. Time to dream of puffy jackets…….